The Speed of Life

“If your friends don’t get you into situations where you may have to swim out of a vehicle, do you even have friends?”

That’s the question Karah Behrend used to caption a June 2019 Instagram video post in which she is seen sitting and smiling, beer in hand, almost fully submerged in a mud pit somewhere on (or off – depending how you frame it) a flooded dirt trail in rural Texas. She had gone “muddying” with a close friend as a way to lift her spirits and get over a broken relationship and things got deep. In the video, the thought of removing both her and the Polaris RZR from the mud, not to mention the failed relationship, seem to be of no worry; she is simply making the best out of the actual situation and sharing that experience, like she does so many others in her life, with the world. 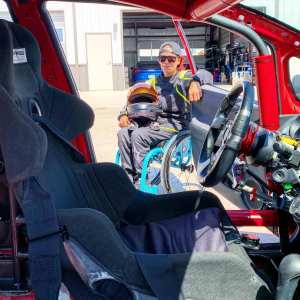 If you haven’t heard of Karah Behrend then you are missing out on someone unique and special. “Badass” is a fitting term commonly used to describe her. She’s an adrenaline junkie who has tried skydiving, horseback riding, climbing, SCUBA diving, and surfing. She’s a wheelchair rugby player (class 3.5) for the nationally ranked Oscar Mike Militia. And she’s a Rally Driver who races UTV and road race cars (think Honda Fits and Mini-Coopers). Karah is the first female with a disability to receive a license from the Sports Car Club of America (SCCA). In 2019 she became the first disabled driver to compete in the weeklong, all-female Rebelle Rally, finishing second in class with her co-driver, U.S. Army vet Rachael Ridenour. Karah’s goal is to drive for NASCAR.

“I really, really, really enjoy going fast, as in I kind of want to be the fastest person who has ever lived,” Karah Behrend, 28, shares. “And in NASCAR there has never been someone like me who has done it, and there are lots of little kids with disabilities out there who need to look up at the TV and see someone like them doing it so they can see they can do it, too. So, simple enough, that’s going to be me.”

Her social media is stuff of legend. Think Instagram and TikTok, content that has been known to draw north of 1 million views. She shares her life and uses her experiences (both positive and negative) to connect and bring together people. Her attitude. Her effort. Her thick skin. Wheelies over the edge of a 20’ cliff? A doorbell cam catches you flipping forward out of your chair?  Karah keeps it real. And by real, it’s the in-your-face-sometimes-middle-finger-raised kind of real.

“I use social media to connect with people who need to be connected if that makes sense,” she tells me. “The Internet has given us a powerful tool in that none of us are ever totally alone in our experiences any more and if we open ourselves up and show people what we are doing and what we are going through then none of us will feel totally alone.

“When I was first going through my diagnosis and all this,” she adds, “I didn’t know how to handle it so I started making content so I could connect with other people and it has been really, really therapeutic for me.”

As for her backstory, let’s pick it up right out of high school. Karah scored super high on one of those aptitude tests that suggests possible career and professional paths so she decided to enlist in the Air Force. In 2011 she signed papers as a communications signal intelligence analyst. Karah chose the Air Force partly because of her family’s military history. Her grandfather served during the Vietnam era, her biological father was in Desert Shield and Desert Storm, and her adopted father was an Army Ranger who fought in Panama. Karah served for six years before being medically retired after a surgical complication led to a condition called Reflex Sympathetic Dystrophy (RSD), a neurological disorder that impacts her involuntary functions such as temperature control, blood pressure, heart rate, pain, inflammation, swelling and other functions that a person doesn’t actively control. It progressed to paralysis.

She spent 2.5 years at Walter Reed.

Let’s talk driving. Her first car after rehabilitation was a VW Jetta. Karah would transfer into the driver’s seat and break down her manual chair, placing the wheels in the back seat and the frame on the passenger side. As for hand controls, well, let’s just say she got creative.

“Instead of hand controls, I used a broomstick,” she says with a laugh. “I broke the broom parts off of broomsticks and tied them to the pedals then I pushed and pulled. It did it’s job before I upgraded to portable hand controls.” 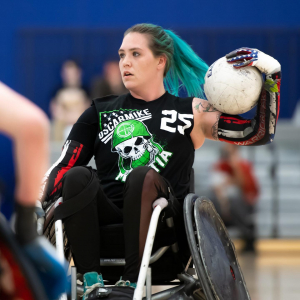 But that “system” (thankfully) didn’t last long. In early 2021, TrueCar and Autonation chose her for the 2021 DrivenToDrive award for inspiring wounded veterans in partnership with DAV (Disabled American Veterans). Karah was awarded a 2020 Chevrolet Colorado ZR2 pickup (with a Monarch hand control system) and now has it fully built out – wheels, lights, a lift, and a rooftop tent, etc. It has basically become her personal chase truck, She’s fiercely independent and uses it not only as her lifeline for adventures into the Arizona and Southwestern USA deserts but also as a means to transport everything from her racing gear to her rugby equipment.

Truth be told, her ingenuity and creative hand control inventing skills did recently come in handy once again. When a set of hand controls didn’t arrive in time for a race, she went to Walmart, bought a couple sets of  “old people walking canes,” cut them up, and secured them to the pedals. She finished the grueling off-road race no worse for the wear.

In the world of adaptive athletes and adventure seeking, game changing women, the legend of Karah Behrend is just starting. She brings her own sunshine into everything she does and, thanks to her social media, she brings us along with her, too. There are glass “half empty” people, glass “half full” people then there’s Karah Behrend, a true warrior who is living, loving, and driving at the speed of life.

Keep up with Karah Behrend through her social media channels at “KINDOFAQUAD.”