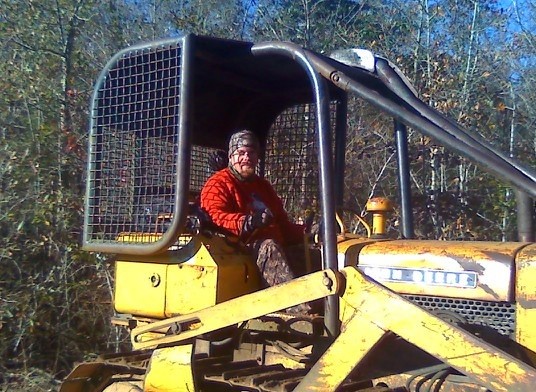 Dennis Knox: A Life of Adventure, A Lifetime of Passion

If you happen to be wondering, by chance, what it’s like to survive being lost at sea for more than 24 hours, Dennis Knox is the guy you should ask. He can also tell you a good bit about big and small game hunting on continents around the world, all types of fishing from ice to spear, and SCUBA, too. And before I forget, yes, he’s also a pretty decent alligator hunter. 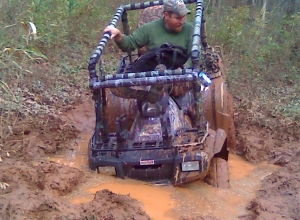 Yes, you heard it right. This is one of those stories that, if it weren’t all true, you might think belongs in an action movie or cable series. And I’ll admit that never in all my decades of writing have I written about someone being lost at sea or gator hunting let alone both. But that’s because I have never before met anyone like Dennis Knox.

“I feel like if I share my story and experiences, I’m helping out someone somewhere,” Dennis Knox, 53, begins. He’s at his Palm Harbor, Florida home, taking an interview break from his 27 year job at AT&T while also preparing for a two-day offshore fishing trip. The Gulf waters are forecasted to be flat and calm for the upcoming weekend so he thinks he can make it 55 miles out to good fishing waters, then back, on two consecutive days. Why not stay on the boat overnight? Two trips means he can maximize his haul of fish; what he catches and unloads on the first day doesn’t count against what he catches on day two. He’ll captain his 30’ Island Hopper. It has an open and spacious deck for his chair. His 25’ Carolina Skiff will stay docked on the lift.

If you haven’t guessed by now, Dennis has a huge sense of, and passion and purpose for, adventure. He’s a modern-day outdoorsman. That sense of adventure and being outside took root as a kid growing up in upstate New York. He comes from a family of hunters and fishermen. Twelve months of the year they were outside. Always. Almost every day. 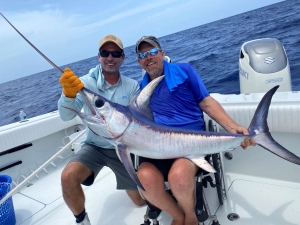 It was while living in Georgia that his life changed. Less than a year after leaving the Air Force at the end of 1992, where he worked in electronics on telephone switching systems, Dennis sustained a T2 spinal cord injury from a motorcycle accident in July 1993. His sister, whom he calls his Guardian Angel, pushed to get him into The Shepherd Center for rehabilitation and it was there that he saw his life could still have tremendous purpose and opportunity.

“I had someone come in to Shepherd as a peer support person, he was young, he was working, he was about to get married, and when I saw him pull up in a Jeep, my eyes opened right up, I realized these were all things I could do,” Dennis Knox shares.

“More than that I wanted to get right back to it,” he adds. “I was never depressed, never down, and knowing my old employer was holding my job kept me going. Knowing others believed in me helped me believe in myself.”

As far as driving, the car that his therapists recommended he drive lasted just about a year.

“I went to my first deer hunt pulling a trailer behind a Buick Grand Sport and quickly realized I needed something different,” Dennis says. “My old Buick wasn’t built to pull a hunting trailer so, after seeing what others were driving and how they did everything, I upgraded to a truck.

“And while some of the others (hunters) had helpers, I wanted to be fully independent,” he states. “As I traveled more and more for hunts, my trucks got bigger and bigger, higher and higher. I had systems to get myself up then I’d pull my chair in, and I had systems for all my gear and equipment. I remember one truck I had, I could basically roll my chair right under it.”

He now primarily drives a 2015 BraunAbility Ford Explorer that he bought used in 2017. His wife, Jessica, drives a 2016 Honda Accord.

Dennis shares, “Neither of us have bought new in quite some time. Things change so much, and so fast, I like to know what I’m driving is proven. But, that said, I’m always looking.”

Mechanically inclined, a welder and fabricator, Dennis has more sets of hand controls than he can count. He uses them on Bobcats, golf carts, trucks, a Can-Am side-by side, and everything else that fits his lifestyle. His driving circle currently runs from The Keys, through Florida and Georgia, to Louisiana. He’s planning a fishing trip to Alaska as well as a hunting trip to Wyoming. While the gator hunting in Georgia is good, he says Florida is better. A good 12-footer can weigh more than 700 lbs. 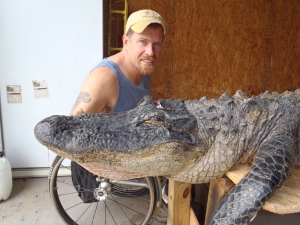 “Things go from calm to chaos when you catch one,” he laughs. 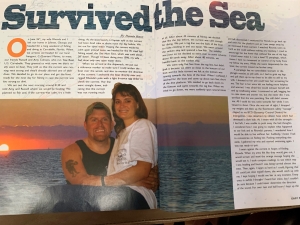 Oh, before I forget, here’s the story of Dennis being lost at sea. Imagine the feeling when you come near your boat after a dive off the Florida Panhandle and the current is holding you back, it is just too strong to swim against it to get to your lift. You swim and swim, fight and fight, but make no progress. Minutes turn to hours as you drift farther and farther away, paralyzed, swimming only with your arms. Through an entire day then night you stay afloat. You are rescued the next day, picked up more than twenty miles from where you started. And here’s the kicker. You know the waters very well, you drifted right through the same area where you like to go shark fishing.

“My outlook on life made me, and makes me, want to keep going,” he reflects. “I’ve got so many things I still want to do. I’m far from slowing down.”