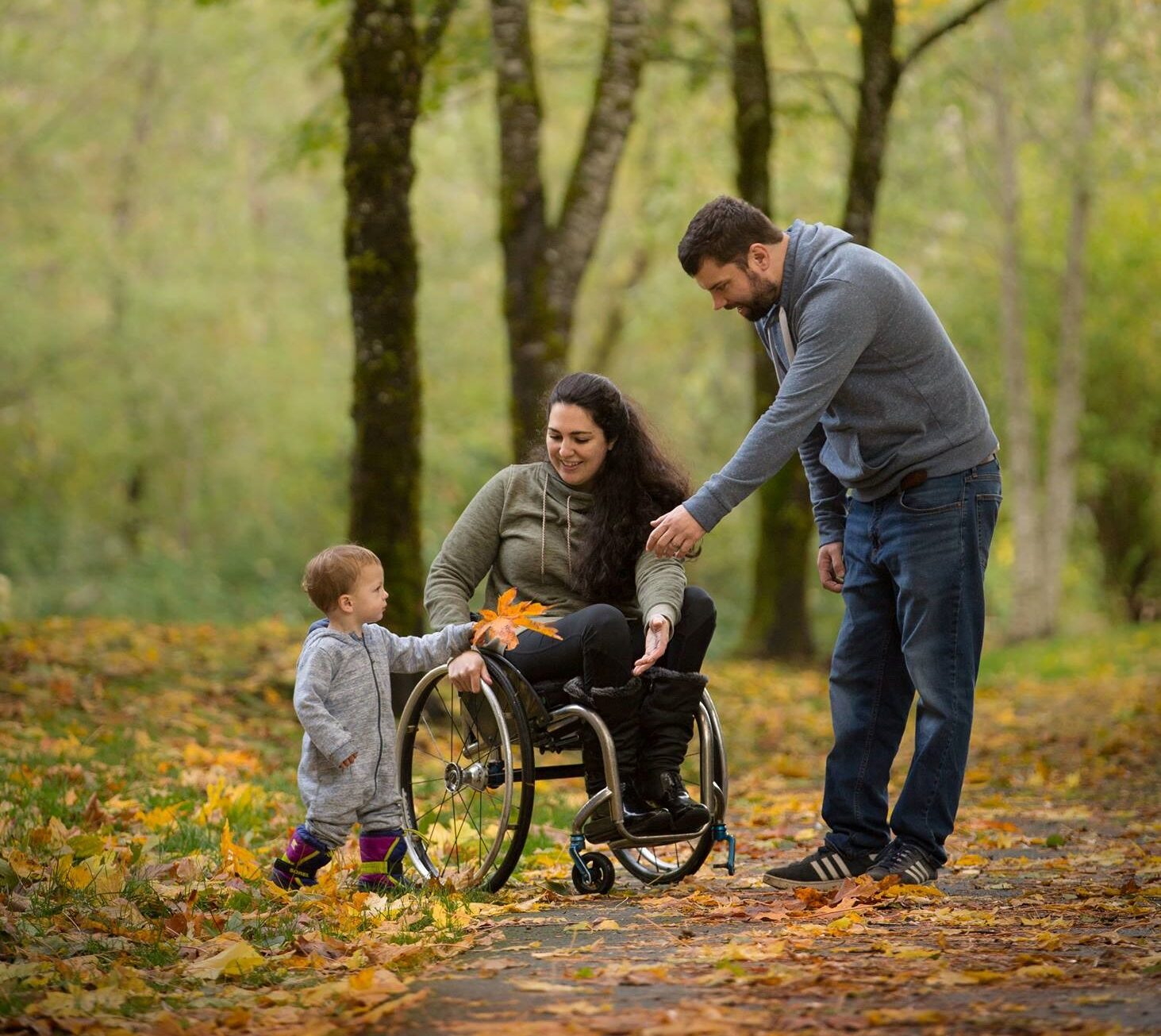 When it came time to interview Eve Hampton for this story, I figured connecting with her and finding time to chat would be a challenge. Everything I knew about Eve affirmed she is a woman on the go. In addition to being a Mom to an active toddler, she is a top level wheelchair basketball player and coach who works in adaptive sports and also just so happens to have a master’s degree in clinical mental health counseling. And there’s her love of art – graphic design, photography, jewelry, and sculpture.

She and her husband of nearly five years, Bob Pratt, a Purple Heart recipient who served two tours of duty in Iraq with the 1st Battalion 7th Marines, are kindred spirits, too. They recently relocated to Seattle from Portland, love the outdoors, and once spent nearly three months camping and touring the U.S. as part of a move from Arizona to the Pacific Northwest. So I reached out to her early assuming it would take a good bit of time for her to reply given a schedule I could only imagine was packed.

To my surprise, Eve’s reply came quickly and with good reason. With a late February due date, she was seven months pregnant with her second son and was justifiably taking it easy and slowing down as her mobility was temporarily challenged.

“I love everything about parenting and being pregnant, it can be just a bit exhausting though with the added complexities that come with having a disability,” Eve Hampton, 33, begins. “Especially near the end, my first pregnancy kept me from going out and being independent for months on end so I’m doing my best, now with a toddler in tow, too, to stay as healthy and active as I can.”

Eve’s disability resulted from Transverse Myelitis contracted at age 13. She learned to drive with hand controls a few years later and always believed she would drive a car. But one of the big changes she made in her life after her son, Ari, was born, was switching from driving a car to a minivan. She now drives a Honda Odyssey with a Braun in floor conversion and a six way swivel transfer seat provided by The Ability Center.

“I was referred to getting a minivan for my old job,” she says. “They guided me through the process and showed me all the different options. How others feel about the options, and their experiences are important to me, too, so I place a lot of value in user experiences and feedback so I did as much research as I could before making the change.”

The changes she enjoyed were immediate and lasting.

“It wasn’t until I got the van that I realized I had been becoming less and less active, making fewer and fewer trips, and letting all the logistics and steps required just to go out with my son get in the way. For example, if he didn’t want to clip in his car seat I’d have to get back in my chair and it all became difficult and frustrating,” Eve says, continuing, “Now, with the van, I can get close to the seat(s) and make sure everyone is loaded in. That’s the best part, being able to put my kid(s) into their car seats. And I like how clean the system is plus the aesthetics of how it all looks and operates. And once I’m in it, the van can operate with a regular door closure which is quicker and more efficient especially during drop-offs and pick-ups.”

Eve Hampton’s story of mobility illustrates that living an active life with a disability can be a success if it comes with a willingness to adapt and accept change. Keeping an open mind, exploring different solutions and embracing change is key, too.

“I don’t know if I ever planned on being a ‘Soccer Mom’ type minivan driver but now I embrace it,” Eve concludes. “My van gets compliments. I have more motivation to get out, I don’t have to think about all the steps it will take to get somewhere and back, and I can be more spontaneous, too. Well, at least as spontaneous as I can be right now with another new baby on the way.”

Mike Savicki’s “Mobility My Way” is a column which appears quarterly in NMEDA’s Circuit Breaker magazine.